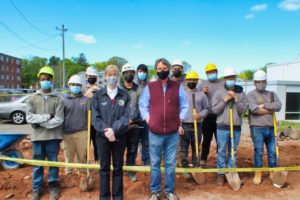 Rossi has agreed to have the charger installed in the City Hall parking lot for public use.

Once the two-week project is finished, electric car owners can use the charger for free because it is connected to an existing solar array atop the future West Haven Center for the Arts, Colter said.

The city, however, will monitor the usage cost and may install a pay station if the usage exceeds what it earns from the rooftop solar photovoltaic system, Colter said.

The charger installation is a cooperative effort between the West Haven Department of Public Works and the Hamden school’s electrician training program.

Hire Us for Your Next Project

Student Workforce is a business run by students and faculty at the CTECS.